This Manifesto was published in 2021 and sets out the Buckingham Society’s purpose, how we plan to achieve it and how you could help.

The Buckingham Society annual lecture was given by Bill Robins to a full house at the Buckingham University’s Vinson Building.

The talk covered clandestine agencies hosted in many of the great houses around North Buckinghamshire during the Second World War. 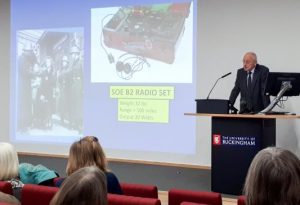 See the report by clicking here

After 17 years in Buckingham, Sunil and Rita Gandhi left the Post Office at the Gingerbread House for the last time on Monday October 11th.

Throughout those 17 years Sunil and Rita provided a simply brilliant service to all of their customers as could be seen from the great tributes posted on Facebook where people almost queued up to sing their praises. Always ready with a smile, a kind word and good advice, Sunil and Rita will be missed. 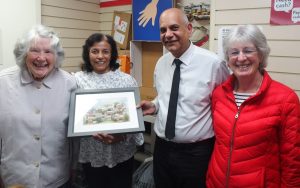 To mark the occasion of their leaving, at the suggestion of Buckingham Society member Una Robinson the Society presented Sunil and Rita with a framed print showing a series of pictures of notable Buckingham buildings.

The print was taken from an original painting by Buckingham Society member Peter Bowtell.
The picture shows Una with Rita and Sunil and Society Membership Secretary Gill Jones.

The railway came to Buckingham in 1850.  It could have been here even earlier, complete with a large locomotive and carriage works if, as is generally believed, that plan hadn’t been scuppered by the First Duke of Buckingham & Chandos who would not allow the railway line to cross his estate at Stowe. So, instead the line went via Wolverton – how different Buckingham might have been if the original plan had gone ahead!

The line lasted until 1964 when passenger services were stopped. Final total closure took place in 1966 with the last train arriving on April 4th carrying Her Majesty the Queen who had come on a visit to Buckingham. That visit, along with other important events in the life of Buckingham’s railway, is celebrated in a new information board that has been installed by the Buckingham Society on the remains of the former station along the Railway Walk next to the University of Buckingham’s car park in Station Road.

Funded with the help of the Buckingham and Villages Community Board, the information board was unveiled by Franz Rothe, a lifelong Buckingham resident who first suggested the idea in a letter to the Advertiser a few years ago. The Buckingham Society hopes that people strolling along the Railway Walk, which follows the former railway line, will find the board of interest. 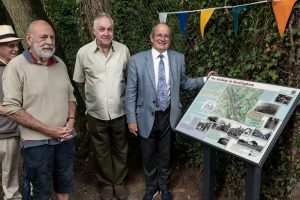 The picture shows Franz standing alongside the information board between Roger Edwards, Chair of the Buckingham Society, and James Tooley, Vice-Chancellor of the University of Buckingham. 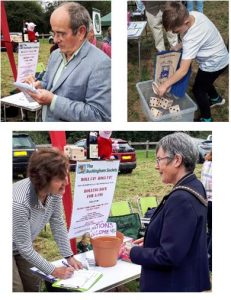 The annual Summer Garden Party this year began with a talk by Annabel Page who is the Project Officer for Natural Flood Management at the River Thame Conservation Trust. 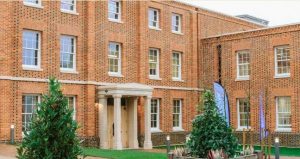 Held in the lecture theatre of the Vinson Building at the University of Buckingham, it was an excellent opportunity to see so many people in person we had not seen for long due to Covid. 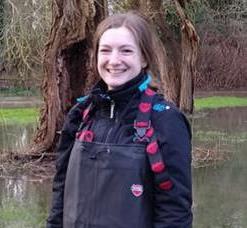 Annabel gave us an illustrated and very detailed presentation of the work she is doing in conceiving environmental strategies for river improvement projects for the River Thame Conservation Trust.
The Trust now operates in both the Thame and the Upper Ouse River catchments.  Her talk focused on Nature-Based Solutions to catchments management, and the Rivers Trust’s current Natural Flood Management project which, it is hoped will be taken up and help reduce the flood risk to Buckingham.

The following links to the River Thame Conservation Trust will allow you to explore the work the trust is doing and importantly to ask questions.

The Buckingham Society Annual Garden Party:
The garden party which followed the lecture was held in Ondaatje Hall with the kind permission of James Tooley, the University Vice Chancellor. The event was attended by 60 members and guests and the dry weather enabled attendees to explore the Hall’s beautiful gardens, whilst enjoying drinks and canapes. It was a delightful evening which many guests were reluctant to leave!

On Friday 13th August 2021 Buckingham MP Greg Smith met members of the Society at the home of Kathy Robins.  Mr Smith said “It was a very positive discussion about all things planning, including reform, the Oxford – Cambridge Arc spatial strategy consultation, flood risk assessment, protecting and enhancing conservation zones, and the importance of keeping planning decisions local.  I look forward to working with the Buckingham Society further” 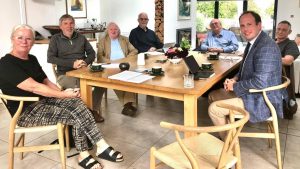 Report of the Buckingham Society Design and Conservation Awards which were presented on Civic Day 22 June 2019.

This was a very successful event on the 25th April 2019 attracted more than the 20 people expected.